I owe my training (B.A., M.Sc. and Ph.D. in Mathematics) to my great professors and TAs at the Math department of the Technion — IIT in Haifa, Israel. Following postdocs at Vanderbilt and at the University of Oklahoma, I decided to attempt a transition into the applied domain, following a long-time interest in the mathematical foundations of cognition. Specifically, I was interested in the role Topology might play in exposing and explaining high-level, symbolic reasoning as an emergent phenomenon, “bootstrapped”, so to speak, from the lowest level control structures which the scientific consensus still directly relates to cognition: the interactions among neurons and the interactions between neurons and their environments.

Joining Kod*Lab in the fall of 2011 as part of the CHASE MURI framework introduced me to a menagerie of problems in data analysis and representation with fundamental connections to information theory and complexity theory on the one hand and topology and geometry in curvature bounded from above on the other, with potential applications ranging from controlling swarms,  through new methods for unsupervised clustering/classification, to life-long learning.

Below is a selection of projects, current and past, all joined by the common thread of geometry being used to encode formal information structures. 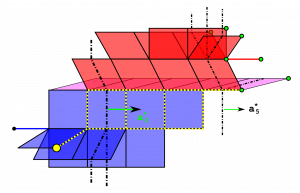 Funded in part by AFOSR CHASE MURI, by NSF-CABiR, and by AFRL SIRCUS.

Estimation of Distance-Based Hierarchies in the Presence of Noise.