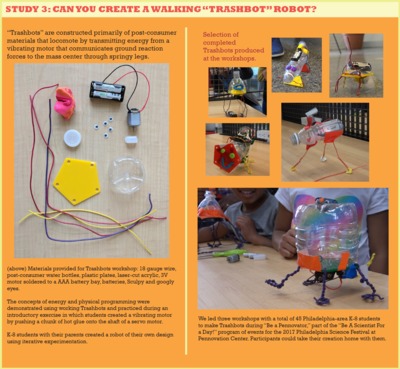 The art practice of play uses spontaneity and surprise to communicate meaningful content and inspire critical thinking (1-3). We describe three engineering education outreach efforts that use play to communicate legged robotics research concepts. In the first workshop, Penn engineering students were motivated to learn how to program a legged robot using the narrative of a “dance competition,” with the winning dances to be showcased at the Philadelphia Science Festival. In the second workshop, Philadelphia School District high school students used a poseably programmable legged robot to tell a story by performing a series of behaviors in a set of their own design and documenting the story as a video artwork. Here, there were two narratives: One created by the workshop directors, communicating concepts about complex multi-legged behaviors and gaits, and the other created by the students using the robots to express their ideas. In the final workshop, middle school students created locomoting robots using motors, post-consumer materials, and basic art supplies. The concepts of energy and physical programming were demonstrated using working Trashbots and practiced during an introductory exercise making a vibrating motor from a spinning one. Participants then created a robot of their own design using iterative experimentation. We conclude from these three workshops that play can be used as a vehicle for scientific communication. (1) David Getsy, ed. From diversion to subversion: Games, play, and twentieth-century art, Vol. 16 (Penn State Press, 2011). (2) Nato Thompson and Gregory Scholette, eds. The interventionists: Users’ manual for the creative disruption of everyday life (MIT Press, 2004). (3) Diedra Krieger, ‘Plastic Fantastic,’ Gyre Exhibition, Anchorage Museum, Alaska, 2014.