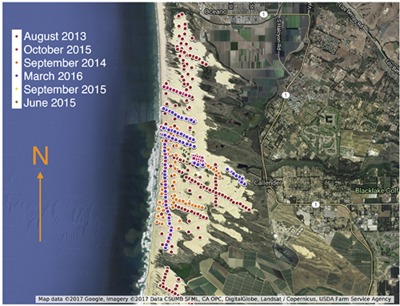 We study the spatial sampling strategies employed by field scientists studying aeolian processes, which are geophysical interactions between wind and terrain. As in geophysical field science in general, observations of aeolian processes are made and data gathered by carrying instruments to various locations and then deciding when and where to record a measurement. We focus on this decision-making process. Because sampling is physically laborious and time consuming, scientists often develop sampling plans in advance of deployment, i.e., employ an offline decision-making process. However, because of the unpredictable nature of field conditions, sampling strategies generally have to be updated online. By studying data from a large field deployment, we show that the offline strategies often consist of sampling along linear segments of physical space, called transects. We proceed by studying the sampling pattern on individual transects. For a given transect, we formulate model-based hypotheses that the scientists may be testing and derive sampling strategies that result in optimal hypothesis tests. Different underlying models lead to qualitatively different optimal sampling behavior. There is a clear mismatch between our first optimal sampling strategy and observed behavior, leading us to conjecture about other, more sophisticated hypothesis tests that may be driving expert decision-making behavior.