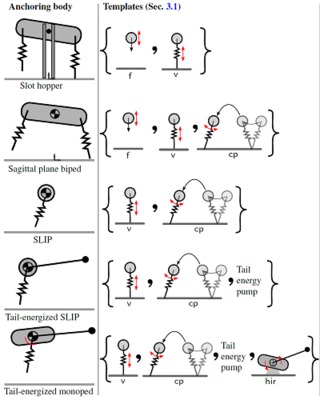 Though multi-functional robot hardware has been created, the complexity in its functionality has been constrained by a lack of algorithms that appropriately manage flexible and autonomous reconfiguration of interconnections to physical and behavioral components.

Raibert pioneered a paradigm for the synthesis of planar hopping using a composition of “parts”: controlled vertical hopping, controlled forward speed, and controlled body attitude. Such reduced degree-of-freedom compositions also seem to appear in running animals across several orders of magnitude of scale. Dynamical systems theory can offer a formal representation of such reductions in terms of “anchored templates,” respecting which Raibert’s empirical synthesis (and the animals’ empirical performance) can be posed as a parallel composition. However, the orthodox notion (attracting invariant submanifold with restriction dynamics conjugate to a template system) has only been formally synthesized in a few isolated instances in engineering (juggling, brachiating, hexapedal running robots, etc.) and formally observed in biology only in similarly limited contexts.

In order to bring Raibert’s 1980’s work into the 21st century and out of the laboratory, we design a new family of one-, two-, and four-legged robots with high power density, transparency, and control bandwidth. On these platforms, we demonstrate a growing collection of $\{$body, behavior$\}$ pairs that successfully embody dynamical running / hopping “gaits” specified using compositions of a few templates, with few parameters and a great deal of empirical robustness. We aim for and report substantial advances toward a formal notion of parallel composition—embodied behaviors that are correct by design even in the presence of nefarious coupling and perturbation—using a new analytical tool (hybrid dynamical averaging).

With ideas of verifiable behavioral modularity and a firm understanding of the hardware tools required to implement them, we are closer to identifying the components required to flexibly program the exchange of work between machines and their environment. Knowing how to combine and sequence stable basins to solve arbitrarily complex tasks will result in improved foundations for robotics as it goes from ad-hoc practice to science (with predictive theories) in the next few decades.