The goal of EduBot project is to develop a small form-factor modular RHex variant that is a cost-efficient education and research tool.

The development of the EduBot platform started in late 2005 as part of the NSF-FIBR program. The platform has been employed inESE112 and ESE313 which are two undergraduate level courses in the Electrical and System Engineering Department of University of Pennsylvania. The platform has also been used for various research activities and undergraduate senior design projects.

Another RHex variant akin to EduBot v1.0; SandBot was used by colleagues at Georgia Tech to study methods of traversing granular surfaces, such as sand, using a legged robot.

Beginning Fall 2008, our group have focused on the new generation of the EduBot platform which is more robust than the first version in terms of mechanics, electronics and programming infrastructure. 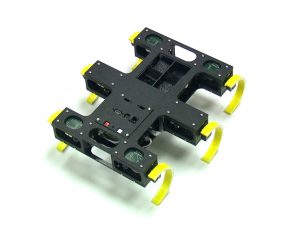 EduBot v1.0 is a small form factor programmable hexapod platform that adopts the classic RHex morphology. It is built on a modular electromechanical infrastructure that facilitates easy repair and upgrades. An EduBot system is a distributed control system consisting of a collection of embedded actuator/sensor nodes that are informationally linked up over RiSEBus, a real-time network with bus topology. Embedded peripheral nodes are self contained systems that can perform local operations on their own in accordance with the command issued by other nodes in the system. Simultaneously, these nodes broadcast their state information for the other nodes in the system. In our design one of the nodes is a PC/104 stack featuring a Pentium class CPU where the higher level behavioral controllers run. From a biological perspective in an EduBot system the CPU resembles the brain, RiSEBus serves as the neural pathways, and the peripheral nodes takes the role of the active neuromuscular tissue.

The development of the EduBot platform started late 2005 as part of the NSF-FIBR program. The goal of this work was to produce a low cost programmable platform that can be employed in comparative biology and experimental robotics studies. We also envisioned to employ the EduBot platforms in undergraduate and graduate level courses as a laboratory equipment. A secondary goal of the EduBot work was to develop a general purpose modular electromechanic infrastructure for the robotics.

Cost of a system is an important parameter in its acceptance as an effective research tool. A direct consequence of the economies of scale and the ease of assembly provided by the modular design cost of EduBot production is reduced to roughly 1/5th of its older sibling, RHex.

During the course of this work I have constructed 7 different versions of EduBot system. In addition to the main line of RHex-like versions I also constructed and/or help design different morphology platforms that employ the EduBot’s electronic/software infrastructure. These other robots that are based on the EduBot electronics are SandBot, SprawlHex? and DynoClimber?. The RespondBot RDK from my start-up is an off-spring of my EduBot work. Until 2008 the EduBot development work was a one person activity. In 2008 our group extended its work which led to a mechanically robust and sensor rich version of EduBot which is named sRHex?. For more detail on the past development work and sister projects please see the EduBot History page.

The EduBot robots have been employed in ESE112 and ESE313 — two undergraduate courses at Penn. Our robots also served us in various research activities and were employed also in several undergraduate senior design projects.

Beginning Fall 2008, our group focused on the new generation of the EduBot platform which was more robust than the first version in terms of mechanics, electronics and programming infrastructure. The mechanical frame of Edubot v2.0 had been designed and manufactured by Kevin Galloway as a collaboration with the Modular Robotics Lab which is another subsidiary of the GRASP Lab.

This project is an encouraging step to the new generation of RHex platform with stronger sensory capabilities which is what we mainly pursue.