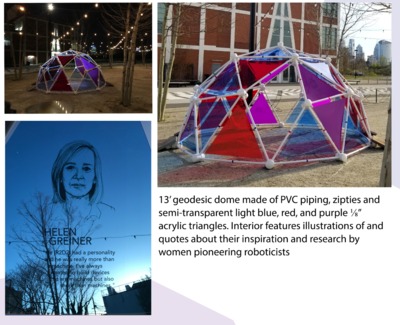 We describe the Nomadic Monument for Women in Robotis (NMWR), a project celebrating women pioneers in robotics. NMWR is a 13’ semi-transparent geodesic dome with illustrations and descriptions of the women and their research on the inside faces of the triangles. Visitors can see rough outlines of the illustrations from the outside, but must enter the dome to learn about the women. As an immersive environment, the dome provides visitors not only a place to learn about inspiring women but also a space to feel that they are a member of this inspiring community.

The geodesic dome was introduced by Buckminster Fuller in the mid-20th century as a new form for human shelter that would be more environmentally friendly and affordable, made possible by new building materials and the innovative use of tension to hold a built structure together. Simple facts and diagrams about dome geometry are included on dome. Fuller’s domes have also had a lasting influence on artists, including Krieger. Her 11-year ongoing project Plastic Fantastic engages community members in building a geodesic dome out of 6000 post-consumer water bottles, with notable installations at the Anchorage Museum in 2014 and Philadelphia’s inaugural Art in the Open in 2010. The NMWR dome will be constructed out of PVC piping and light blue, red, and purple panels of acrylic.

A range of living women roboticists, many with a connection to Philadelphia, are featured in the dome. They work on a variety of problems in modern robotics, including helping give robots a sense of touch (Katherine Kuchenbecker, formerly at Penn); programming groups of robots to work together (Daniela Rus, MIT); sensing devices with medical applications (Ruzena Bajcsky, founder of the GRASP Lab at Penn); designing robots to move around in and collect information about harsh environments like Mars and Antarctica (Ayanna Howard, Georgia Tech); developing technologies (including robots) to assist in caring for children or the elderly (Maja Mataric, University of Southern California), and many more.

The portraits and descriptions of these women challenge stereotypes about who can be an engineer, and the presentation of Hartmann-Dow’s near life-sized portraits at eye level around the inside of the dome creates a space for visitors to enter the community of women roboticists. Stereotype challenge and the sense of belonging to a community have both been shown to influence interest in engineering by women and girls (for a review, see [1]).

NMWR will be presented at the 2018 Philadelphia Science Festival and will be on view at three events throughout the festival: At the Screening of Top Secret Rosies on Friday, April 20; at the Be a Pennovator event on Sunday, April 22; and at the Science Carnival on Saturday, April 28. The first two events will be at the Pennovation Center, and the last will be on the Parkway.