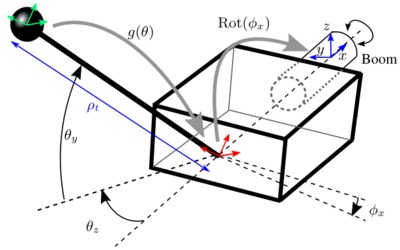 The Jerboa, a tailed bipedal robot with two hip-actuated, passive-compliant legs and a doubly actuated tail, has been shown both formally and empirically to exhibit a variety of stable hopping and running gaits in the sagittal plane. In this paper we take the first steps toward operating Jerboa as a fully spatial machine by addressing the predominant mode of destabilization away from the sagittal plane: body roll. We develop a provably stable controller for underactuated aerial stabilization of the coupled body roll and tail angles, that uses just the tail torques. We show that this controller is successful at reliably reorienting the Jerboa body in roughly 150 ms of freefall from a large set of initial conditions. This controller also enables (and appears intuitively to be crucial for) sustained empirically stable hopping in the frontal plane by virtue of its substantial robustness against destabilizing perturbations and calibration errors. The controller as well as the analysis methods developed here are applicable to any robotic platform with a similar doubly-actuated spherical tail joint.