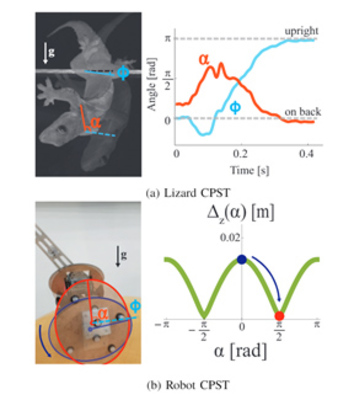 Despite substantial evidence for the crucial role played by an active backbone or spine in animal locomotion, its adoption in legged robots remains limited because the added mechanical complexity and resulting dynamical challenges pose daunting obstacles to characterizing even a partial range of potential performance benefits. This paper takes a next step toward such a characterization by exploring the quasistatic terrestrial self-righting mechanics of a model system with coronal plane spine twisting (CPST). Reduction from a full 3D kinematic model of CPST to a two parameter, two degree of freedom coronal plane representation of body shape affordance predicts a substantial benefit to ground righting by lowering the barrier between stable potential energy basins. The reduced model predicts the most advantageous twist angle for several cross-sectional geometries, reducing the required righting torque by up to an order of magnitude depending on constituent shapes. Experiments with a three actuated degree of freedom physical mechanism corroborate the kinematic model predictions using two different quasistatic reorientation maneuvers for both elliptical and rectangular shaped bodies with a range of eccentricities or aspect ratios. More speculative experiments make intuitive use of the kinematic model in a highly dynamic maneuver to suggest still greater benefits of CPST achievable by coordinating kinetic as well as potential energy, for example as in a future multi-appendage system interacting with a contact-rich 3D environment.