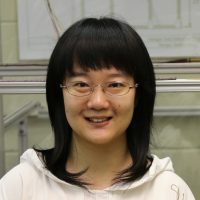 Feifei Qian is a Postdoctoral Researcher at University of Pennsylvania. Feifei received her PhD degree in Electrical Engineering from Georgia Tech in 2015, during which she focused on creating terradynamics models of legged animal and robot locomotion on granular terrains like sand, snow and gravel. During her postdoc research, Feifei is fascinated in studying the complex interactions between legged robots and obstacles, and searching for general principles that allow robots to exploit obstacles and disturbances to improve mobility in cluttered environments. Feifei is also leading the NSF project “Collaborative Robotic Systems for Geosciences Field Research”, where she develops novel methods for legged robots to characterize erodibility of dune surfaces and provide transformative field dataset to assist desert research.